Mature Topics and Books in the Program

Are you reviewing the student books in the Read Side by Side Reading Program? All texts in the program have been thoroughly read and reviewed by our staff.  In this blog you will learn how titles were selected, what our criterion was for selecting (and not selecting) certain titles.  You will also be alerted to titles in the program that might be considered mature content.

Books in the Read Side by Side Reading Program have been selected for their quality, exposing all students to award-winning, rich literature.  Texts are selected according to:

Below you will find specific notes on text selection by grade level, as well as links to reviews on Common Sense Media.

Titles in the third-grade scope and sequence introduce students to conflict; in the home, in school, in the community, and in the world.  Students will read scenes with mild violence and tension.  An effort was made to avoid books with foul language.

Units 3-5 explore the topic of the civil rights movement. Be aware that when reading historical fiction, the words 'blacks' and 'negroes' will sometimes be used to indicate the African American people and community. In context of the text, these terms are not meant to be derogatory.  When selecting books for these units, an effort was made to avoid books with the 'n' word and shocking imagery.

Of the read-aloud titles for third grade, the one that might raise a red flag is the book Maniac Magee, by Jerry Spinelli. The topic of the book is racism, and segregation.  Jerry Spinelli intentionally uses exaggeration to get a reaction from the reader.  He wants to reader to shout, "That's not right!"

Of the third grade book club titles, the only title that might raise a red flag is Swindle, by Gordan Korman, simply because the book is about a heist.

Titles in the fourth-grade scope and sequence introduce students to themes of right and wrong, westward expansion, and the pioneering spirit.

Units 1 & 2 explore the difference between right and wrong, and in these books the main character begins by making some bad choices.

Units 3-5 explore the topic of westward expansion and ask students to question the impact of westward expansion on people, cultures, and the environment.  Be aware that when reading historical fiction, the word "Indians" will be used in the text to indicate the Native American or First Nations people and community.  In the context of the text, this term is not meant to be derogatory.

Some mature content will be introduced in read-aloud titles, including mild use of foul language (Shiloh, by Phyllis Reynolds Naylor).  Lessons will guide teachers in how to address mature topics and foul language with students.

The 2nd unit of study in fourth grade teaches the genre of fantasy.  Some religious groups may be opposed to the teaching of fantasy in schools.  Books in this unit do include magic, magicians, witches, dragons, and magical creatures. Rest assured, the reader's attention is drawn to the author's use of  humor and the themes of respect, loyalty, compassion, honesty, and bravery.

Of the read-aloud titles for fourth grade, the one that might raise a red flag is the book Streams to the River, River to the Sea, by Scott O'Dell. This book tells the story of the Lewis and Clark expedition from the perspective of Sacagawea. Students will later evaluate the historical accuracy of this book (in book clubs) and come to the understanding that though the events are factual, Sacagawea's thoughts and feelings are inferred by the writer and may not be accurate. This book has not been reviewed by Common Sense Media but may raise concern due to the following topics: abduction (Sacagawea is abducted from her home), scalps (a scalp hangs from her abductor's horse), polygamy (Native Americans practice polygamy), sex (after Sacagawea is married, she learns she is pregnant), domestic abuse (Charbanneau hits Sacagawea).

Some mature content will be introduced in the book club titles: stealing (in Shoeshine Girl by Clyde Robert Bulla, the main character's friend steals a dress, in How to Steal a Dog by Barbara O'Connor, the main character steals a dog).  It is assumed those reading above grade level have greater maturity to handle mild foul language.  Lessons will guide teachers in how to address mature content and foul language with students.

Titles in the fifth-grade scope and sequence introduce students to themes of survival, human rights, the American Revolution, and slavery.

Be aware that some of the content, including visual imagery in unit 4, may be unsettling to students. Lessons will guide teachers in how to address mature topics and unsettling imagery with students.

Of the read-aloud titles for fifth grade, the one that might raise a red flag is the book Chains, by Laurie Halse Anderson. This book tells the story of the American Revolution from the perspective of an African slave girl. This book may raise concern due to the following topics: abduction (Isabel's parents were abducted from their home in Africa), abuse (Isabel is branded, Madame Lockton is hit by her husband), criminal punishment (Isabel attends a hanging), alcohol (Isabel serves alcohol to her master).

Some mature content will be introduced in the book club titles.  It is assumed fifth graders, especially those reading on and above grade level, have greater maturity to handle more difficult content.  (Mature content is also difficult to avoid at higher text levels.)  Lessons will guide teachers in how to address mature topics with students.

Of the fifth grade book club titles, the books by Katherine Patterson may raise concern.  In the book The Great Gilly Hopkins Gilly uses foul language repeatedly across the text (hell), demonstrates racist behavior toward her African American teacher, and steals from her neighbor.  Fortunately, she changes across the book, resolving these character flaws.  In the historical fiction book Lyddie, the main character becomes a bobbin girl at the Lowell factory.  Conditions there are difficult, and in one scene Lyddie is groped by her employer.  It is known that one of Lyddie's roommates has a boyfriend.  Later in the text, the roommate is pregnant.  (This book has not been reviewed by Common Sense Media.)

Titles in the sixth-grade scope and sequence introduce students to themes of the American Dream, immigration, human rights, and the Holocaust.  Lessons will guide teachers in how to address mature topics and imagery as well as foul or racially triggered language with students.  The book that will likely raise the most concern is Four Perfect Pebbles because it is a memoir about the Holocaust and genocide.

To teach deep reading, teachers must utilize texts that invoke thoughtfulness.  To encourage engagement and collaboration, teachers must utilize texts that 'get students talking'.  While the Read Side by Side Reading Program seeks to increase student's engagement with complex text, we also want to be sure that texts are developmentally appropriate for students.  We take great care in selecting rich, quality, and appropriate text and hope that you will trust us as your partner in this work! 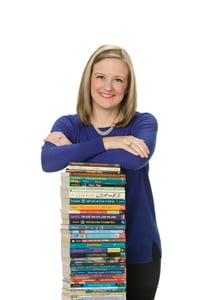 Read Side by Side Publications, LLC.

The Joy of Summer Reading

I love summer for SO many reasons, but maybe the best part of summer for my kids and I is SUMMER...

The Pull of The Chapter Book

How does a child know that he or she has become a good reader? When you talk to children about...

Reducing the COVID-Slide by Looking at Summer Slide Research

Learning loss during COVID closures have caused many to wonder, “Will students fall behind in...