The C. I. A. Approach in The War with Grandpa

I cannot believe we are in the process of wrapping up the writing project that follows our read aloud The War With Grandpa. This unit just flew by. My students had such a fun time making connections with the struggle that comes with being in a disagreement with a family member. This was a great choice on Sarah's part for third grade. Students were so into the book because of its real life connections. All students can relate to being in disagreements with someone you love. I am going to break down quadrant by quadrant the work we did in The War With Grandpa.

My students had an interesting take on the characters in the story. During our character list lesson most kids found Jenny to be very humorous. I know in other classrooms some students were making the connections between Ereth from Poppy, and Jenny in this book. My families are mostly migrant and low socio economic status. In the book the problem that arises is Peter needs to give his room up because his grandpa is coming to live with them. My students made great text to self connections about the way you feel when you have to share or give up something that you are sentimental about. They were really able to use sympathy and empathy to relate to how Peter was feeling. They also agreed that Peter was the victim at this point of the story.

Another really exciting thing for me was the connection the students were making to our new writing curriculum. We just started using Lucy Calkins writing units. We are in personal narratives. My students are writing their own true and real stories. When Peter starts off the book explaining that he is writing a true and real story about his war with grandpa my kids couldn't believe it. They were so excited to see how Peter wrote his story. We also used The War With Grandpa as a mentor text during the writing of our own personal narratives. We focused on what Robert Kimmel Smith did that made his book a great story then applied that to our own writing. I have to say it was an exciting teaching moment for my students and I. 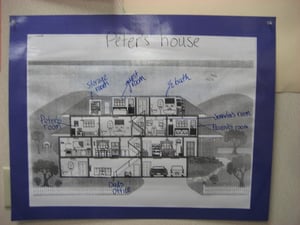 A teaching tip that is helpful with the setting of The War With Grandpa, is to take the setting map Sarah has included and have it blown up and laminate it. This way you can track how important the layout of Peter's house is to the situation he is in. Here is a picture.

In quadrant two students started analyzing the characters in the story. I loved the t-charts that we use to show the differences in life circumstances and beliefs about war. It made it so clear to my students how different Peter and Grandpa Jack are. Next year I would like to try and use the GLAD strategy of a comparative input chart to show the life circumstances and beliefs about war. I think this would be even better for my ELL students.

When it came to focusing on Peter I tried something new this year and had great success with it. Students were having a hard time understanding how to pull information from the text and infer a character trait based on that. I decided that since most of my students are ELL students that I would need more of a visual to guide them. I decided to use icons to helps students understand what type of text evidence is being used to infer a trait. We used a stick figure running if the evidence was an action done by the character. We used a heart if the text evidence was something the character felt internally and we used quotation marks to show it was something that the character said exactly. The kids were really excited to use the icons. It helped them understand what type of text evidence helped them infer the trait. It was a hit. 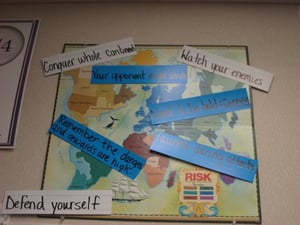 In the second quadrant we also look to outside text about the game risk to help understand the strategies Peter is using in the book. I found a really old version of risk at good well and brought it to show the kids. We had a lot of fun talking and predicting about Peter's tactics in the book. To help students continually remember this important piece in the story from the author I pinned the game board on the wall with all the strategies we pulled out from the outside text. Here is a picture.

I can not believe how fast the book goes once you get to the third quadrant. At this point in the book my kids go crazy anytime I stop to turn and talk because they are so invested and just want to discover the turning point. Talk about student engagement. They have developed such a deep understanding of the plot at this point in the story that they can't wait to get to the turning point. My kids had not doubt in their mind what the turning point was when we got there. They nailed it. Here is an example of their work.

In the fourth quadrant we had our read in celebration and enjoyed the end of the book.Most kids discussed that they wanted to hear more about how the lives of Peter, Grandpa and Jenny changed once the living arrangements were changed. We are currently working on the writing project on writing a choose your own adventure story. The kids definitely have an easier time writing a retaliation ending rather than solving the problem peacefully. I have come to realize this is normal. It is harder to solve a problem peacefully. Our class discussed that it is hard to ask for forgiveness once you realize you have done something wrong. You need to have more character to do the right thing than the wrong. What a great life lesson to discuss with students! When we wrap this up I am excited to discuss the life lessons and character that Martin Luther King Jr. showed in his lifetime. My kids are already looking forward to this.

Castle in the Attic with Janet Erickson

My students are really into Castle in the Attic!  We have almost reached the end of the second...

C. I. A.: Poppy in Sarah Linington's Class

Beginning the CIA Unit We started the unit of study for Poppy after two weeks of Patricia Polacco...

We just finished our first quadrant of Castles in the Attic and one of the most important parts in...